• CORBYN'S COVE BEACH- The coconut-palm fringed beach, 3 kilometers away town is
ideal for swimming and sun-basking. Facilities like hotel, restaurant, bar, changing room,
adventure water-sports are available here. Historical remains like Japanese Bunkers can be
seen on the way to this beach. The Snake Island situated just across the beach is popular for
scuba diving. The Restaurant & Beer Bar run by Tourism department provides delightful
cuisine at reasonable rates in a soothing ambiance on the beach.

• LIGHT AND SOUND MUSIC SHOW:-The Sound and Light show in the Cellular Jail
narrates the saga of the Indian freedom struggle, brought alive through sound and light
effect of the brutal and barbaric atrocities piled on the freedom fighters deported to these
islands and incarcerated in the small cells of this jail. This show is very popular among the
tourists visiting these islands.

• CELLULAR JAIL-The Cellular jail, declared a National Memorial, is located at Port Blair
which had stood as a mute witness to the most brutal and barbaric atrocities meted out to
national freedom fighters, who were incarcerated in this jail. The jail, completed in the year
1906 acquired the name ‘Cellular' because it was entirely made up of individual cells for
solitary confinement. It originally was a seven-block structure with three stories and a
central tower acting as its fulcrum comprising of honeycomb like corridors. This jail, now a
place of pilgrimage for all freedom-loving people draws everyone down memory lane to the
years of freedom struggle. Jail Museum open from 9:00 am to 12:00 noon and from 1:30 pm
to 4:45 pm. Overnight Stay At Port Blair.

Transfer to Swaraj Dweep (Havelock Island) by Cruise. On arrival, our representative will receive from Havelock jetty and escort you to check-in to the selected hotel. After little relax, proceed for the world&rsquos most renowned beaches Radhanagar Beach. The Island also has the biggest concentration of breath-taking diving and snorkeling sites, thus acting as a paradise to marine world explorers. Overnight stay at Havelock.

Note: Collect the packed Breakfast from the hotel reception, if you are traveling by early morning Cruise. Ferry timings is mentioned in the tickets provided to you, please report 45 minutes prior to departure with a valid id card. Ferry operation is purely subject to Govt. clearance and weather condition. Class of travel and timings of the ferry is subject to availability at the time of confirmation.

Elephanta Beach is one of the most beautiful places in Havelock Island which is famous for its clear water and variety of live corals &colorful fishes. One can do several other water sports activities like Glass Bottom, Snorkeling, Banana Ride, Sofa Ride etc.

Rest of the day at Leisure

• BHARATPUR BEACH :- The Bharatpur Beach is a beach of  a low tide located just half a kilometer from the jetty, considered to be the best beach in the Neil Island. The calm, tranquil and perchance the picturesque beach is also popular with various water activities like swimming, snorkeling and scuba diving.

• LAXMANPUR BEACH :- Laxmanpur Beach is a picturesque waterfront, covering a long stretch of area of Laxmanpur village of Neil Island. The sea is shallow and calm, making it perfect for swimming and snorkeling. The serene beach offers a stunning panorama, especially the sun sets in the horizon.

• NATURAL BRIDGE :- Neil Island is famous for its naturally shaped- like rock also known as the Howrah Bridge. It has two living natural corals formed just like a bridge. The rock formation was called by the Bengalis who settled in the island in the early days and they refer it as the Rabindra Setu and later called it the Howrah Bridge. It is best seen during low tide.

Check out from Hotel aftter Breakfast

Dropping to airport with memories and terrific holiday at Andaman Islands. 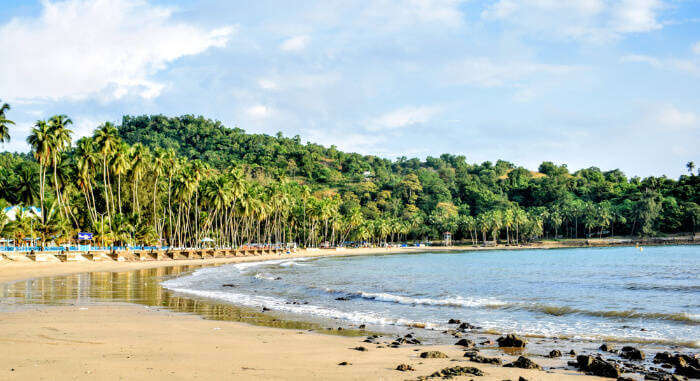